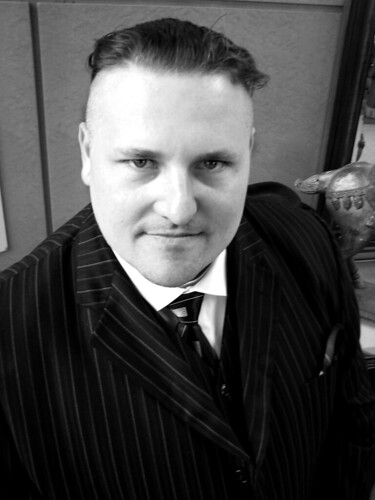 Thursday Afternoon. I can tell, because this is my Thursday suit. Late Afternoon, because I spent most of the night drinking at the Wolf and Merkin, because a certain Con Host closed down the Early Early Arrivals party... you guest it, Early! Like, before 11PM! Chris Golden was heard muttering in the lobby at 11:30, "See what happens when you let those pansy-lightweight Brits run the parties!"

This picture was taken by the talented and lovely Liza Trombi, who somehow managed to catch my boyish Charm in this photo, instead of my "serial killer menace" that usually gets caught on film.